(special thanks to the members of www.blue-semiramis.de! Pictures by A. Napp.)

Every priest in Ancient Egypt worked on behalf of the Pharaoh. A separate order of priests - as in the Catholic or Orthodox Christian culture - did not exist during the Old (ca. 2707–2216 B.C.) and Middle Kingdom (ca. 2137–1781 B.C.). Some people serving in the country's administration had to fulfill some months in the temples as priests, too. After this serving time, they simply returned to their administrative duties. A permanent place had, this was one of the exceptions, the lecturer. Only since the New Kingdom, some priests were 'professionals'. Nonetheless, the major part was organized after the rotation principle, and they worked in shifts, sometimes. They had to serve one month in the temple, and then three months they worked in the fields or in administration jobs before they returned for another month of temple-service. In most cases, people served as priests in the temples whose Gods were somehow related to the work these men and women did in their secular life. Physicians often were priests of the Godess Sachmet.

We can differentiate between so-called "hem-netjer" (=Servants of God), who were allowed to enter the sanctuary, and "wab"-priests, who had more administrative functions. But the determinatives are not always clearly distinguished in the sources, and there are changes during the centuries. The designation "it-netjer" (=Father of God) is also known, but the position of this person is not yet correctly defined. The titles varied according to the god, in whose temple they served. Some priests of high rank accumulated several titles or even had high ranks in different temples, and thus wore the distinctive ornate of all of them. The most common title for the High Priest was "hem-netjer-tepi" (=First Servant of the God). "Sem"-Priests were part of the funeral rites. Normally, the eldest son of the deceased performed these rituals. Therefore the sem-priest is often portrayed with the characteristic hairstyle for a child. Already since the 3rd dynasty, the title was also used by non-relatives, 'professional' priests. A very important place was the one of the "cheriheb" - the Lector-priest. He had not only to read the texts of the rituals, but in some ceremonies was a kind of prayer leader or choirmaster. In the early times, members of the royal family had this rank and office.

While working in the temples (funerary temples and temples of the different gods) the priests were provided with food and other things from the temple lands, and from offerings. The knowledge they needed was provided in the temple schools or taught to the sons by their fathers.

How to obtain the office: Inheritance and Appointment

The priestly office was in most cases inherited, but some persons worked their way up through the ranks. Diodorus Siculus (1st cent. B. C.) tells as well, that the office was inherited. 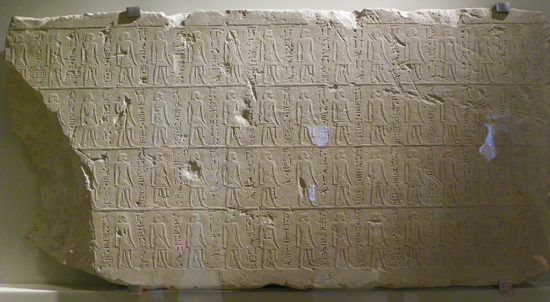 The "Book of the Temple" gives detailed instructions about providing for the family of a deceased priest, and what should be given his son, when he enters the office. If the successor was still too young, a replacement should be taken and paid. In Ptolemaic times, a boy at 14 was old enough to obtain the office of High Priest of Ptah in Memphis, as shows the stela of Pasherenptah in the British Museum (EA 886). In the case of the higher ranks, the inauguration is called 'enthronization'. In addition to this hereditary principle, there was a selection considering the abilities and knowledge of the possible candidates, too. Not automatically the eldest son followed his father in the office. A text from the Graeco-Roman time speaks about a physical check of the candidates and a knowledge test. According to Diodorus Siculus, the sons of the priests were educated in the knowledge of the Hieroglyphic and Demotic scriptures, geometry, arithmetic, and astronomy/astrology.

Some priests, especially high-ranking ones, were appointed by the Pharaoh and chosen amongst the officials of the court. Such a nomination by the Pharaoh we know for example from the times of Queen Hatshepsut and of Ramesses II., who appointed a man named Nebwenenef as High Priest of Amun in Thebes by rendering the signet rings and the scepter for the office. Nebwenenef was already High Priest at the temple of Hathor in Dendera - this office went now to his son. In the Third Intermediate Period (11th - 7th cent. B.C.) the residence of the Pharaohs was transferred to Lower Egypt, the city of Tanis. Upper Egypt with the old residence in Thebes became a sort of theocracy under the leadership of the acting High Priest of Amun of Karnak, who assumed royal prerogatives. Nevertheless, there was not a throughout concurrence situation between Thebes and Tanis. In this period, the successor of the deceased High Priest - who was a family member in most cases, but not necessarily his son - had to be confirmed with an oracle of Amun. At his time, the High Priest of Karnak had command over the army (at least) in Upper Egypt, too.

If the Pharaoh was not content with the services of his priests, he could reprimand and even remove them from offices. If the relationship was good, the temple and the High Priest got rewards and offerings.

Under the Pharaohs of the Libyan dynasties, crown princes were nominated as High Priest of Amun at Karnak (and in other important temples). King Osorkon II. (881 / 880 - 852 / 851 B. C.) even appointed his son High Priest of Amun in Tanis - the residence city -, while the boy still was a child. Of course this behavior led to conflicts with the old priestly families, who defended the principle of heredity. 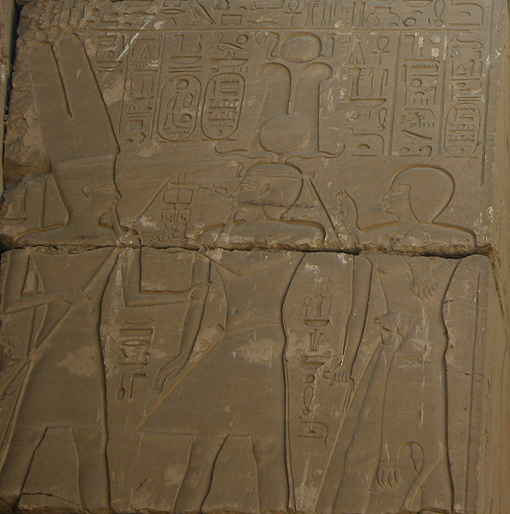 High Priest Iputj in his ceremonial cloths with leopard skin, behind his father, king Scheschonk I. of the Libyan dynasty, standing before Amun (Bubastis Gate, Karnak)

Women in the temple service

As long as the Old Egyptian religion lived, women worked as singers and musicians in the temples. From the time of the Old kingdom, a lot of women from noble and rich families are known who bore the title of a "hemet netjer" (maid of god). Normally, they only served in temples of female deities, such as Hathor or Neith, however side by side with male colleagues. Members of the royal family could carry out functions in the funeral rites and in temples of male deities, too.

In the Middle Kingdom the titles of "wereshet" (keeper of the god) or "wabet"-priestess are reported, however, the number of women serving in this rank in the temples was decreasing. The slow but steady process of exclusion of women from the direct cult is probably connected to changes in society and is in accordance with the continuing sacralisation of the priestly service for men. During the New Kingdom, we can only find very few women with the title "hemet netjer" in the sources. Especially the female members of priestly families were still integrated in the works and service of the temples. Some women in the rank of a Second Servant of God are known, for instance, Ahmes-Nofretere, wife of king Ahmose (16th cent. B.C.), who became Second Servant of Amun, and Mutnedjemt, wife of Pharaoh Psusennes I. (11th cent. B.C.), who held this title for the temples of Amun and Chons. Herodotus claims, that in Egypt no woman serves as a priestess in any temple - however, we know of priestesses at his time, as the stela of Katjakadja shows. 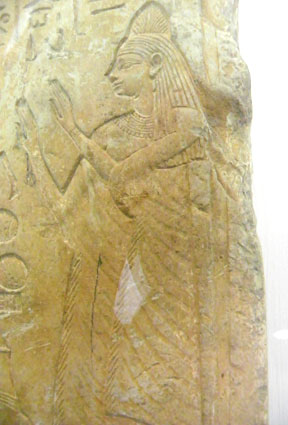 Chantresses and Chanters of the Temples

From the New Kingdom on, the title of a temple-chantress is held in great esteem and held by women of high social status.

Men also served as chanters and musicians in the temples: 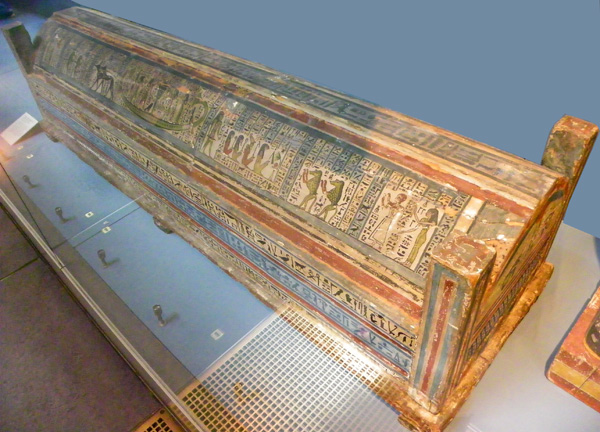 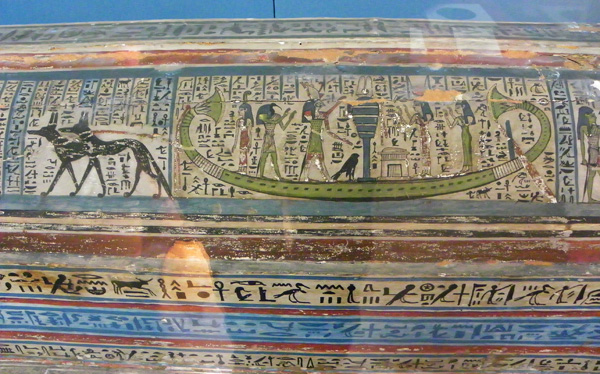 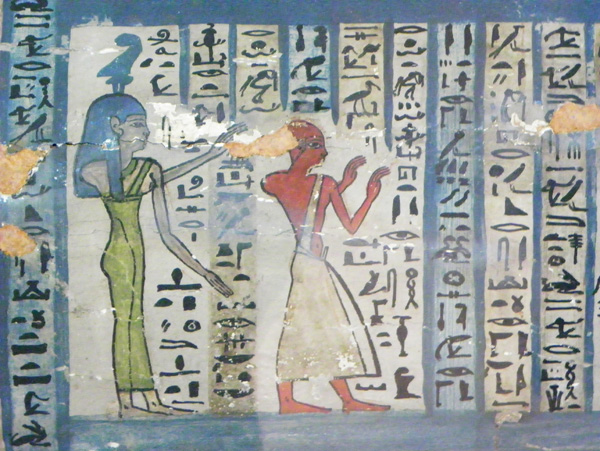 Another tomb of a male temple singer has been discovered in West Thebes in 2014. It belongs to the 3rd Intermediate Period: Article in der Luxor Time. 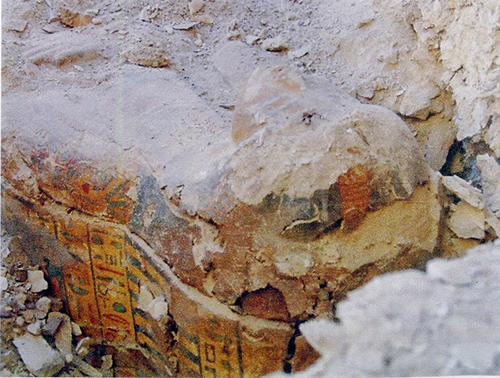 The "God's Wife of Amun"

The title "hemet netjer net Imen" (God's Wife of Amun) already appears in the 18th dynasty. For instance queen Hatshepsut bore that title. In the time of the Theocracy, the title gained new importance. The first woman holding this rank was probably Maatkare, daughter of High Priest - King Pinodjem I. Probably since Schepenupet I, the "God's Wifes" were bound to chastity. They had wide religious functions, eventually shadowing the ones of the High Priests of Amun. The "God's Wifes" adopted their respective successor. They had their own huge household including female and male members for religious and administrative purpose. Perhaps this (re-)creation of the title and office had the aim to set a more religious counterweight, after the office of the High Priests had become a more political and military one. Maybe this was also the attempt to hinder the forming of priestly dynasties that could, in time, evolve into a concurrence to the pharao again. However, during the 8th century B.C. the "God's Wife" Schepenupet managed to take over the lordship in Upper Egypt. With Nitokris I., daugther of Pharaoh Psammetich (664-610 B.C.) the power of the "God's Wifes" reached its summit. Nitokris' successor even held the title and rank of a "First Servant of Amun" - fulfilling all ritual duties connected with the rank - and royal titles as well. With the Persian occupation of Egypt the political influence of the "God's Wifes" was gone, their religious prestige rested.

Their last "cultural influence" unfolded in the late 19th century, when August Mariette, founder of the Egyptian Museum in Cairo, designed a character for an opera, based on the "God's Wife" Amenirdis. Later Guiseppe Verdi used this in his famous "Aida".